Is Sanders a loser, a phony, a fraud, who has never done much with his life except talk?   Many would say without hesitation yes, yes he is and quite obviously!  But, lets take a fair look at the facts and then you be the judge, ok? 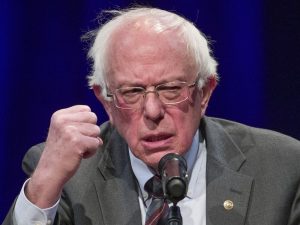 According to several reports, Sanders didn’t collect a steady paycheck before being elected to office as mayor of Burlington, Vt., in 1981.

Despite a 50 year track record, Sanders has never really done much or been good at anything, except talking about socialism.  However, if you ignore facts and don’t know your history, you might find him a compelling speaker.

Bernie inherited a little money from his Dad when he was a young man and this allowed him to purchase a small piece of land with a shack on it that had a dirt floor. He lived in this shack with his first wife for about two years and then she had enough and left. Presumably she wanted a floor, but he couldn’t afford one.

Bernie managed to find part-time work and together with his inheritance money, he attended the University of Chicago where he graduated in 1964. Prior to running for office, Sanders worked a series of odd jobs that include: an aide at a psychiatric hospital, a freelance writer, a preschool teacher and a carpenter. He was recognized as a really bad carpenter.   Ironically,  he went from being very poor to a multi-millionaire without fulltime employment in the private sector and living off the taxpayer’s money.

Sanders was and has always been a hardcore leftist activist. He ran for local office a few times before winning.  He then used the local experience to run for Congress and then the Senate, as an independent.

For his whole time in high office Sanders sponsored just 7 pieces of low level legislation that passed.  (Sanders served as senator from Vermont since 2007 and as U.S. Representative for the state’s at-large congressional district from 1991 to 2007)

S. 2782 (113th): A bill to amend title 36, United States Code, to improve the Federal charter for the Veterans of Foreign Wars of the United States.

S. 885 (113th): A bill to designate the facility of the United States Postal Service located at 35 Park Street in Danville, Vermont, as the “Thaddeus Stevens Post Office.”

It has been reported that Sanders did run for political office while collecting unemployment benefits in 1974. I could find no evidence that he ever collected welfare.

Most recently Sanders drew fire for a book deal where he allegedly used campaign money to purchase 500,000 copies of a book that he wrote. Here’s the link From Forbes:

Also, here’s the link to FEC filings showing: Bernie spent $444,937.50 of his campaign dollars on his book “Our Revolution”.

Sanders’ book royalties included a $505,000 advance on his book “Where We Go From Here,” which was published in 2018, Newsweek reported.

This is why he has so much income even though this book sold only 26,000 copies.

Somehow all of this doesn’t seem quite kosher. But it does explain how Bernie got rich by running for president.

SUMMARY: By traditional evaluations Bernie Sanders is loser. He’s only a good talker that is enamored with failed socialism. His best ideas are just plagiarizer from Marx and Lenin.  He’s never really been anything except a far left ideologue, selling socialist snake oil to ill informed and gullible voters.   If he becomes the democratic nominee for president Trump will likely use Bernie’s lackluster track record to shred him into oblivion.

24 Responses to Spotlight on Bernie Sanders