It’s a Great Time to Chill 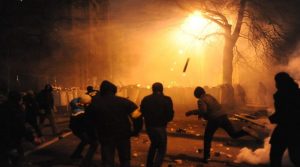 Another long hot summer approaches and once again the headlines are filled with racist stories, from coat to coast.  Doesn’t matter to the headline if it was an unbelievably trivial incident in Central Park over a dog running without a leash or something much more serious, like a black man dying after he was handcuffed.  Headlines are designed to draw you in and sell papers or air time.  The reporters will then craft the their story in a way to fit the popular narrative.  And these days racism is still ranked among the top topics to write about, a carry-over from the Obama years.

Look how one reported punch up her story about white parents who adopted two black children….no facts, just propaganda.

WAIT, did you read what I just read?  Did she really say, the recent incidents mean they won’t be safe anywhere they move?  OMG…this means to me that cops must be lying in wait for a person of color to be ambushed!  That every single white person is a closeted member of the KKK, ready to lynch a black man at the first opportunity.

The reporter goes on the write, “It happened again. This time in Central Park in New York City. Amy Cooper, a white woman, called the police after a black man who was bird-watching asked her to leash her dog, which is the rule in that part of the park. In the now-famous video, Cooper called 911 and said an African American man was “threatening” her and her pet.”  Okay, so the lady was a kook, to that there is no question.  Was she feeling threatened or feeling that her dog was being threatened, only her psychiatrist knows for sure, but not the lame reporter trying to sell tabloid news.

Look folks, in the real word cops deal with kooks like this lady a thousand times a day all over America.  Ask any cop, he’ll tell you!   They can recite a dozen or so kook calls with no problem.  They are way too common.  One of the first things that cops learn is the world is filled with kooky people who say stupid, kooky things.  They usually vote democrat too, but I digress.

The main point here is, its time for everyone to chill out and realize how we are all being played by the news media.   The air across America is not thick with racial tension!  This is hype talk.  Fact is, racism was a nuthin burger, to quote Hillary, until Obama got it fired up again.  Even though he tried to support his belief of racism in America,  almost every incident he championed turned out to be a non-starter.  But, the results were still painful.

One can point out the last dozen race incidents that were pure fiction, but they are bull dozed over by that one anomaly, that one unusual case that wasn’t!   That one among the hundreds of faked incidents can cast a pall of suspicion over everything.   Remember, “Hands up don’t shoot?”  That was determined to be a fake years ago, yet it is almost as famous today as the MLK I have a dream speech.  It’s not fair!  If we don’t start sorting out the fact from fiction better we will have air thick with racial tensions come summer.

This entry was posted in Behavior and Psychology, News Media, Police, Crime, Security. Bookmark the permalink.

12 Responses to It’s a Great Time to Chill