Andy Jackson Too Tough for the Mob and More 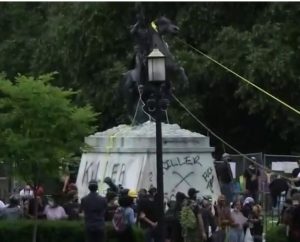 WASHINGTON - Tensions were high in front of the White House Monday night after Black Lives Matter protesters worked to remove the Andrew Jackson statue in Lafayette Square.   But, protestors weren’t successful.  The statue, like a giant stone wall, proved to be too much for them to topple.

A Secret Service spokesperson told USA TODAY, “On Monday evening, in response to the increasingly violent demonstrations in Lafayette Park, four members of the media were directed by the Secret Service to leave the White House grounds.”

Next….Jimmy Kimmel put on leave?  Late Night show host Jimmy Kimmel has come under fire for being racially insensitive for a skit he did in 1997.  The skit was repeated several time until 2004 and it was ten carried on YouTube.   Presumably his immediate departure was in response to pressure from the radical left mob. Kimmel explained he just  decided to take the summer off and go into , , a more relaxing environment.

Kimmel joins the ranks of many disavowed liberals that have said or done something the rabid left mob wants punished.  This includes comedian Joe Rogan, a former Bernie Sanders supporter.  Rogan made the mistake of allegedly laughing at the wrong time about female comedians.

The far left mob was nearly successful in getting Fox News anchor Tucker Carlson fired when they went after his sponsors and threatened a consumer boycott.  Earlier a mob of Antifa social justice nuts began harassing and chanting threats outside the home of Tucker Carlson Wednesday night, and the group banged on his front door as the Fox News host’s wife was inside.  The mob warned Carlson that he and his family are not safe.

A survey this week by Rasmussen, a right-leaning pollster, found that 62 percent of likely voters now have a favorable opinion of Black Lives Matter. At the same time, Rasmussen found that Donald Trump‘s approval rating was 43 percent. That’s almost 20 points lower.

Black Lives Matter is more popular by double digits than both the Democratic and the Republican parties. It’s almost as popular as the U.S. military. It’s much more popular than the pope.

Attacking Images of a White Jesus?

Shaun King, BLM supporter wants to destroy white Jesus images.    From the NewAmerican.com, “Christian iconography doesn’t matter to Black Lives Matter booster and hard-left activist Shaun King — that is, if it happens to portray Jesus and other biblical figures as white.

In fact, he wants it destroyed.

Obviously inspired by the cultural revolution claiming statues coast to coast and fearing descent into irrelevancy, King expressed the above in two Monday tweets, making news in the process.”

TWEET #1   “Yes, I think the statues of the white European they claim is Jesus should also come down. They are a form of white supremacy. Always have been. In the Bible, when the family of Jesus wanted to hide, and blend in, guess where they went? EGYPT! Not Denmark. Tear them down.”

TWEET #2   “Yes. All murals and stained glass windows of white Jesus, and his European mother, and their white friends should also come down. They are a gross form white supremacy. Created as tools of oppression. Racist propaganda. They should all come down.”

King, a left-wing journalist who co-founded the “Real Justice PAC” — a group aiming to help elect hard-left, criminal-enabling prosecutors — is an opportunist (he has been accused of fundraising corruption) and obviously wants attention. But since he has gotten it, and because his words can affect our cultural revolution’s direction, they should be addressed.