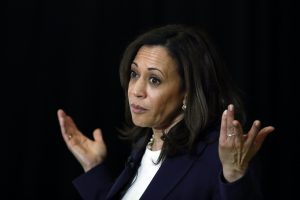 To think that the candidate who folded early in her presidential bid because her message didn’t go over with the people, would now be Biden’s top choice for VP?  That is scary on a number of levels.

Harris is an extreme socialist and she is a  gun-grabber.  She backed a lot of anti-gun legislation that made potential criminals out of gun owners unable to keep pace with these so-called assault weapon laws passed recently.   These CA [only] gun laws were based more on the desire of liberal to impose their will on gun owners out of their own personal bias and hate for firearms.   Those idiots created a lot of misunderstandings and false perceptions and Kamala Harris the socialist has backed them every step of the way.  Yeah, she is a very really a scary person to have next to  the president.

The one party legislature in CA banned all kinds of things on the AR-15 rifle that were more or less just cosmetic or for convenience of the shooter, not something to make it more lethal.   How is banning a pistol grip on an AR-15 going to help anything?  It is not, because its not a  lethal upgrade – purely cosmetic.

A detachable magazine verses a non detachable magazine makes little difference, except for the convenience of the sport shooter.  Enthusiasts like to pre-load various types of ammunition for either hunting or for target shooting and a detachable mag makes it easy and it looks kind of cool, but that’s about it.   An adjustable stock is an illegal feature now, but why?  It doesn’t make it more lethal.   Whether the stock is 15 inches, 14 inches or 13 inches long should not matter.  This is just a comfort feature, but it doesn’t make it more lethal!

Harris backed these stupid do-nothing laws against the AR-15 and she also backed laws that made it extremely costly for gun manufacturers and gun importers to do business in CA.   That has negatively impacted CA financially and put a crimp on the 2nd amendment.

The state has imposed a plethora of expensive testing rules and regulations that are pointless, because they are already covered at the federal level.  However, they do put a restraint on trade in CA and that’s a good thing say democrats.  It makes it hard to turn a profit here for gun dealers, importers and manufacturers.  And the ultimate loser are the gun buyers who denied the opportunity to buy low cost surplus firearms or a variety of new firearms, that are perfectly safe and legal in all but the bluest states.  The worst 3 states are of course are once again California, Hawaii and New York.  But, despite their draconian anti-gun legislation, they have had no impact of criminals who use firearms and there goes their alleged reason for having strict gun laws.

Its a time tested fact that criminals don’t give a rats behind about gun laws.  All these arbitrary laws have done is to make a gun owner more likely to [accidentally] break a technical law and be ruined.   It had nothing to do with crime and safety, that was always a big lie.  This was and is, about the socialist democrats real agenda to eventually confiscate all firearms and have total control over us.   And now we have one of the worst gun-grabbers in history as Biden’s best pick?  She’s potentially a heart beat away from the presidency!

Kamala Harris is a frightening choice for Biden’s VP.   I don’t think he could have done much worse than this anti-capitalist, socialist, gun-grabber.

8 Responses to Kamala Harris – A Frightening Choice as VP