Last Sunday (August 9, 2020) black on black violence erupted at a block party cookout in Washington D.C.  20 people (some reports say 21) were shot including an off duty police woman. More than half of the victims were women and a 17 year old boy was killed.

Both of these incidents were largely ignored by the liberal mass media and Democrats save a few brief mentions.

This is the same Muriel Bowser who on June 5th painted BLACK LIVES MATTER over a two block stretch of street near the White House and renamed a section of 16th street in front of the White House “Black Lives Matter Plaza.” 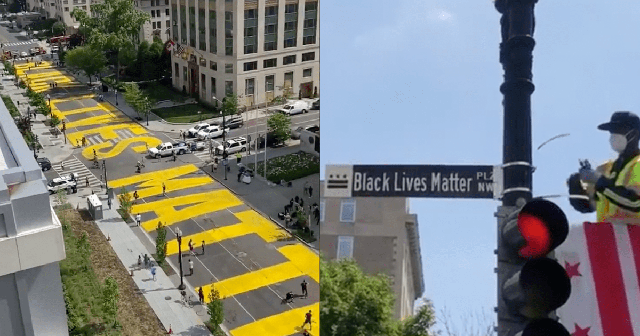 The Warriors for Christ group has charged with Bowser violating the first amendment. Their court filing states — “Bowser’s paramount objective was to convey to the Plaintiffs and all other taxpayers the Black Lives Matter cult, which is a denominational sect of the religion of Secular Humanism, is the favored religion of the city and the Nation and that another who disagrees with their gospel narrative is a second class citizen.”

And what happens when conservative groups follow suit? In July following Bowser’s questionable actions an anti-abortion activist painted “Baby Lives Matter” on the street in front of a Planned Parenthood Clinic in Washington D.C. When two other anti-abortion activists from Students for Life of America attempted to write “Black Pre-Born Lives Matter” in chalk on the sidewalk in front of the same clinic they were arrested.

Kristan Hawkins, president of Students for Life of America says of Bowser, “She’s opened up the streets for public expression from any group. The mayor doesn’t get to choose what speech is allowed on streets and what’s not.”

Students for Life of America and Judicial Watch have both f,iled lawsuits arguing that Bowser does not get to pick and choose what is allowed speech.

Black on black violence and mass shootings occur in nearly every large city in the U.S. and hundreds die every year. The numbers are increasing. Yet where is the BLM? Nowhere. The only violence that concerns Black Lives Matter are the relatively rare occasions where a police officer injures or kills a black criminal under arrest without having his life or other lives put in extreme danger. BLM doesn’t give a damn about the enormous black on black violence problem. Those black lives don’t mean squat to them.

To get a clear insight into the truth I recommend Post Scripts followers read a report from Heather Mac Donald where she states — “The per capita rate of officers being feloniously killed is 45 times higher than the rate at which unarmed black males are killed by cops. And an officer’s chance of getting killed by a black assailant is 18.5 times higher than the chance of an unarmed black getting killed by a cop.”

BLM’s interests are defaming the police, calling for defunding of police departments (ostensibly to fund social programs for blacks) and remove statues of people who owned slaves. But exactly what social programs are to replace police budgets? BLM isn’t specific. Moreover many Democrat political leaders have jumped on board this asinine agenda as well as the liberal mass media.

BLM also says it seeks the “dismantling White Supremacy, Patriarchy, Capitalism, Imperialism and the role the state plays in supporting them.” Dig the inclusion of capitalism in that statement. Can you say “communist?” Actually all of the above BLM agendas are exactly the same agendas of U.S.S.R communists who played up racism, imperialism and capitalism in order to try and discredit the U.S. and destroy our democratic system from within. Given the attitudes of BLM, the left in general, their street mobs and Democrat politicians it would seem that the Russian communists had at least some measure of success.

Of course many BLM members as well as Democrats and the left-wing street mobs prefer to identify themselves with the euphemism “socialist” in place of “communist.”

The truth is BLM uses a common tactic of Marxists and all left-wing radicals — they exploit blacks to bring about a Marxist revolution. The BLM is seeking a civil war in the form of a race war in order to disrupt and bring about their Marxist state ideal . They promote violence while pretending to represent the injustices towards blacks and have portrayed themselves as an new uprising of the oppressed in the inner city. In reality Black Lives Matter is a well-funded conglomeration of communist/socialist organizations that have been around for decades.

George Soros who so far has has granted the BLM $33 million.

Radical left BLM co-founders Patrisse Cullors, Alicia Garza, and Opal Tometi who collaborated to  create the slogan and hashtag #BlackLivesMatterafter the acquittal of George Zimmerman. Their intent was (and is) is to stoke black rage and galvanize a violent protest movement.

Cullors was a protégé of Eric Mann, a convicted domestic terrorist who conspired to murder of officers of the Cambridge police headquarters on November 8, 1969. In the 1960s and ’70s Mann was a member of the Students for a Democratic Society and the Weather Underground (classified by the FBI in 1969 as a domestic terrorist organization) whose shared objective was to launch a race war against the “white” United States on behalf of the nonwhite Third World.

Like the Weather Underground the BLM’s goal is to launch a race war. In a speech at the annual Netroots Nation convention in Phoenix, Cullors exhorted fellow blacks to ”rise the fuck up,” ”shut this shit down,” and “burn everything down!”

Cullors  has openly acknowledged BLM’s revolutionary Marxist objectives declaring “We actually do have an ideological frame. Myself and Alicia [Garza] in particular, we’re trained organizers. We are trained Marxists. We are super versed on ideological theories.”

Patrisse Cullors has expressed her admiration for —

The slogan “Hands Up-Don’t Shoot!”was popularized by Nelini Stamp and constitutes  BLM’s big fat lie about shooting of Michael Brown. Stamp is director of strategy and partnerships for the The Working Families Party, a group that conceals left-wing extremism beneath a veneer of populist rhetoric.  Pro communist Bernie Sanders was endorsed for president by the WPF. According to Stamp “we [the BLM] are actually trying to change the capitalist system we have today because it’s not working for any of us.” It is interesting to note that Stamp makes good money (over 225,000/year) by capitalizing as a professional leftist in the very system he advocates destroying.

Garza, Cullors and Tometi are all members of front groups of the Freedom Road Socialist Organization (FRSO), which is one of the four largest radical left organizations in the U.S.

The FRSO’s main goal is to overthrow American society in order to replace it with a hardcore socialist (i.e. communist) one. FRSO is the direct offspring of the Mao Zedong inspired New Communist Movement which was populated by Marxist-Leninist and Maoist activists in the 1970’s and 80’s.

“whiteness is not humxness, in fact, white skin is sub-humxn. All phenotypes exist within the black family and white ppl are a genetic defect of blackness.” (Khogali intentionally uses “humxn” instead of “human” in order to eliminate “man” from the word. This is a common practice among left-wing feminists.)

“white ppl need white supremacy as a mechanism to protect their survival as a people because all they can do is produce themselves. black ppl simply through their dominant genes can literally wipe out the white race if we had the power to.”

“melanin enables black skin to capture light and hold it in its memory mode which reveals that blackness converts light into knowledge. this is why the indegeniety of all humxnity comes from blackness. we are the first and strongest of all humxns and our genetics are the foundation of all humxnity.”

“melanin is essential for the efficient performance of all the body natural functions. THEREFORE white ppl are recessive genetic defects. this is factual.”

“do you ever wonder how black ppl after centuries of colonial violence, genocide and destruction—no matter what systems created to make us extinct… how we keep coming back? it is because we are superhumxns.”

BLM sounds a lot like some “super humans” (er, “superhumxns”) of the 20th century who called themselves “Aryans.”

And then there is this — Kill All The White Babies

This entry was posted in Culture, Police, Crime, Security. Bookmark the permalink.