The Best Military Rifle of All Time

The Mauser K98 is not #1., it could be in first place, if we were limiting the selection to bolt action rifles, but this is the unlimited class, no holds barred, all round best of the best.

Without further ado, the M1 Garand in 30.06 caliber and is the obvious choice by knowledgeable rifle shooters.

Designed by Canadian-born John C. Garand, an employee of the U.S. Armory at Springfield, Mass., the M1 Garand is a gas-operated, semi-automatic rifle fed from an eight-round en-bloc clip. At the time of its adoption in 1936, the M1 was truly the most advanced weapon system ever fielded.  Early in the production stage they even tried it with a magazine, which I thought would have a worthwhile improvement, but such was not to be.

It was the first successful design capable of firing a full-power rifle cartridge via semi-automatic operation. As such, it can be argued that the M1 represented the first time America sent its boys to war with the best infantry rifle in the world, as the United States was the only nation to fully arm its troops with a self-loading design. Simply stated, the M1 was without equal on the battlefields of World War II.

By the time Germany and Japan had surrendered in 1945, more than 4 million M1 rifles had been produced by Springfield Armory and the Winchester Repeating Arms Co., and with good reason, for the M1 represented a quantum leap forward in engineering from the venerable old ’03 Springfield.

The semi-automatic design reduced the effects of felt recoil on the shooter, making it possible to train soldiers in less time than ever before. The sights were the best ever put on an American rifle up to that time. The rifle could be disassembled for cleaning and maintenance easily while in the field, a huge advantage over the Springfield.

But most importantly, the M1 had a much higher rate of fire, delivering 50 to 60 shots per minute by the average rifleman, which amounted to three times as much firepower than was possible with the Springfield. While our enemies fielded bolt-action rifles, the M1’s increased firepower simply enabled American soldiers to bring more to the fight.   The 30.06 was also a more capable cartridge than the German 7.92×57mm or the Japanese 6.5 x 50mm.  It far outclassed the British .303 round and the Russian 7.62 x 54R.   The American 30-06 is ballisticly superior to all other rounds used by standard foot soldiers. 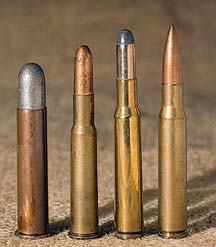 Editors insert:  Over a hundred years ago in 1906, a new standardized rifle cartridge was adopted by the United States military and ironically it happened to be just the right bullet at the right time (see 30.06 on the right edge of the photo.) for the Garand.

The max range for the original 30.06 bullet was about 4700 yds, but since that greatly exceeded the distances available in 99% of the military ranges, the military had two choices, spend millions on new ranges or reduce the powder behind the bullet.  The military chose the latter.  So, the M1 Garand was specifically designed to shoot medium to warm loads.  Shooting the really hot stuff that is available today would damage the old M1.  That’s a good tip to remember, because most shooters assume if its a 30.06 round you can shoot in the M1, but that simply isn’t true.   Well, lets make that… you can shoot it, but you will probably only do it once.  Nuff said?

By the end of the M1’s service life, another 2 million rifles would be produced, a testament to Garand’s genius in creating a rifle that lent itself to a complex, time-consuming manufacturing process. In that regard, the M1 is a shining example of America’s war effort, representing the very best of American manufacturing at its height.  (If our tanks were as good as the M1 the war would have been over 6 months earlier)

Forged in blood, coveted by friend and foe alike, the M1 won its admiration on many fronts. No less than Gen. Douglas MacArthur said, “The Garand rifle … is one of the greatest contributions to our Armed Forces,” while Gen. George S. Patton boldly declared, “In my opinion, the M1 rifle is the greatest battle implement ever devised.”

To an entire generation of fighting men, John Garand is a hero. Garand, the man who shaped wood and forged steel into their sword; and they, the courageous souls who charged into enemy fire from Normandy to Iwo Jima—their lives in his hands.

It’s John Browning who is most often recognized, deservedly so, as the greatest firearm designer of all time. But in this case, it was John Garand who caught lightning in a bottle and harnessed into an earthbound version of the hammer of Thor, the M1. And it was this, the greatest infantry rifle of all time, that helped change the course of human history.—Chad Adams