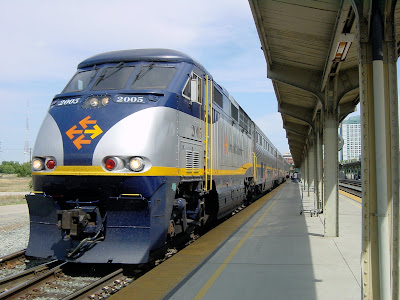 For all of my kvetching about “virtual strip searches” and airport security gropings, my Thanksgiving travel plans always included taking the train (and a bus) to the Bay Area to visit family. It’s more of a matter of convenience and comfort rather than a fear of oppressive security or flying. With four Amtrak California buses leaving Chico every day (and the overnight Coast Starlight train), the bus/train is a pretty convenient way to get around.

It seems like a lot of other people between Sacramento and the Bay Area had the same idea — the Capitol Corridor reported carrying 26,449 passengers over the weekend.

On Thanksgiving Thursday, the train was fairly full as it zoomed past slowly moving vehicles on I-80. On board, single travelers really couldn’t hog the tables meant to seat four, but many could still have a pair of seats to themselves.

The Thursday crowd paled in comparison to the people returning home on Sunday. The four-car train I was on was standing-room only. That’s only the second time I’ve experienced that in my recent travels (for intercity travel).

With the train stuffed with people, the conductor gave fair warning to people waiting to board at stations along the line — he said there were no seats, but people could board if they didn’t mind standing. I was able to grab a seat for most of the trip, but I ultimately gave it up for a mother and daughter heading to Chico.

A huge number of passengers got off at Davis as university students returned from their holidays. There was a similar situation for Chico State — there were so many people returning to Chico on the 6:30 p.m. bus from Sacramento that Amtrak added an additional bus. The added bus provided a welcome amount of space after being on the crowded train.

The buses were running an hour late, which I’m sure was an inconvenience for some. I didn’t mind too much because I could sit on one of Sacramento Valley Station’s grand old wooden Southern Pacific benches and read a newspaper.

While the train isn’t always the transportation solution, it’s certainly an option to consider when traveling around Northern California and beyond.

Ryan is living every week like it's Shark Week.
View all posts by Ryan Olson →
This entry was posted in Travels and tagged Amtrak, holidays, security, train. Bookmark the permalink.