Family Hangs Out Hanging a TV 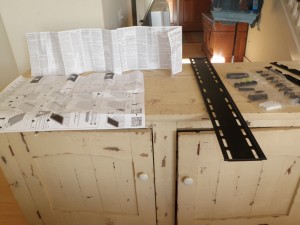 The four of us stood in the aisle staring at the TV screens.  Customers muttered as they walked past.  The sales agent pitched.  The choices were Panasonic, Sony, or Samsung.

“For sports you may like the Sony, but for movies I recommend the Panasonic.”  He switched channels so we could compare.  “With more pixels you get better resolution.  Move back ten feet,” he said.

The Sony looked better.  No, wait, the Samsung.  I glanced at the Panasonic. My wife, Hun, pulled me aside to let an old woman limp by.

“Which is better?” he asked.  The Sony or Samsung, or are they about the same?”

He switched channels on the Panasonic.

“Now which is better, the Panasonic or Samsung, any difference?”

The guy annoyed me.  It was like taking an eye-exam.  I couldn’t decide.  “How much is the Panasonic?” I asked.

“It’s three hundred dollars less than the Samsung. But the sale ends tomorrow.  We can install it for another hundred bucks,” he continued, “But you can probably do it yourself in an hour.”

We bought the Panasonic.  It stayed in our spare room for two months before we had time to hang it.  We removed our old half-ton, splotchy-screen TV and laid out the tools:  Screw driver, fasteners, socket wrench, level.  Hun unfolded the mounting bracket instructions.  They were written in Japanese, Portuguese, German, French, Spanish, Russian, Arabic, and English.  National Geographic maps folded out smaller.

Hun and Kate, my high schooler, cut a sheet of paper the dimensions of the TV and taped it to the wall.  My younger daughter, Maggie, approved its position.  Then, per the instructions, it was time to drill pilot holes.  We searched the house for the drill.  No luck.  I knew we had a cordless drill somewhere, maybe even two.

“I’ll try the garage,” I said, figuring it was misplaced somewhere in that black hole.

You can find all kinds of weird stuff in a garage when you’re searching for something else.  I tripped on the portable air compressor and found the windshield squeegee.  Thirty minutes later I discovered a bird’s nest.  Ah, there it is…the drill.  But the battery was dead.

Hun came out to inspect my progress.  Two minutes later she found my twenty-year-old Skil Drill with a cord.  Cords are helpful for finding lost tools during a search-and-rescue mission.

We unpacked the Panasonic.  It came with more hardware than we needed, cords attached to nothing, a remote control, speaker wires, a wireless antennae, and more instructions; but no receiver cord.  I searched the instructions–in English–for an 800 number.

But I couldn’t find our cordless phone.  Now I was getting mad.

I needed a break and decided to read the newspaper while Hun searched the TV’s box.

“I found the receiver cord!” she exclaimed, sounding like a gold miner.

We leveled and fastened the mounting bracket and inspected our work.  Maggie asked when we’d be ready.

“Just a moment, be patient, we still need to hang the TV.”

Hun and I lifted it onto the mounting bracket while Kate steadied it.

Hun paused, and then sighed, “Behind it.  Let’s take it down.”

We removed the TV, reviewed the instructions, and attached the cords, cables and other miscellaneous wires.  We adjusted the mounting bracket and re-hoisted the TV.  The beast weighed 80 pounds and by now we had moved it three times, once from the spare room and twice to hang it.

“You should take it down again.”

Three hours, 40 minutes and 20 seconds later, the TV was hung.

“Dad, what are you going to do with these five extra cords?” Maggie asked.

This entry was posted in Uncategorized and tagged chico, do it yourself, Eric Miller, flat screen TV, freelance writer, Panasonic. Bookmark the permalink.

133 Responses to Family Hangs Out Hanging a TV