Reason No. 6,035: Why We Should Split the State – AB60 Driver’s Licenses for Illegals

In the latest and most brazen disregard for the rule of law, Hispanic legislators slapped each other on the back as they passed AB60, a bill that when signed into law by Gov. Brown will give driver’s licenses to illegal aliens!

AB60 is an insult to every law abiding resident who came here legally. It is a complete disregard for the notion that state representatives are elected to represent the interests of all the people of the state. This law caters only to a minority, and they are here illegally! AB60 is special interest, race based, legislation and there’s no other way to describe it.

Under AB-60, the licenses would have the initials DP (driver’s privilege), rather than DL (driver’s license), and would state that the document “does not establish eligibility for employment or public benefit.” California’s Department of Motor Vehicles will determine what type of documentation will be required to obtain a driver’s license. However, it’s stated purpose and it’s hidden agenda are miles apart. It’s really designed to win votes for democrats and bring us closer to an open border. And it erodes away another benefit formerly reserved ONLY for the citizens of California. These legislators don’t care if it encourages more illegal immigration, they actually want open borders!

Don’t think for one second this kind of thing is not related to sanctuary cities, it is! It brings illegals one step closer to a whole host traditional benefits and the costs of illegals are already killing us. 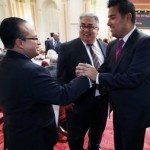 Why do these liberal democrat legislators seem to care more about appeasing the 2.6 illegals living here unlawfully than the average law abiding voter? Whatever the reasons, it has nothing to do with the rule of law; that part has been trounced royaly. Guess we will have toss out the age old “fruits of the poison tree doctrine.” That doctrine pertains to illegally gathered evidence and the summary says nothing legal may follow an illegal action. And yes, issuing a legal license to a non-citizen here illegally fit’s the premise of the doctrine. That’s why I say the legislation makes a mockery of the law and it should not stand.

The original bill as proposed by Assemblyman Luis Alejo (D) of Watsonville would have granted licenses to immigrants who could prove they paid taxes or worked in the United States. However, Mr. Alejo conceded this point late Thursday, reassuring Brown that California would adhere to federal procedures for granting licenses to illegal immigrants and subsequently winning the governor’s backing.

Brown’s support helped propel the bill through the California Legislature. This begs the question…is there one democrat left in Sacramento with an ounce of common sense and the courage to stand up for American idealism and our laws? I think not.

This entry was posted in Uncategorized and tagged California, corruption, regulations, representation, split the state, State of Jefferson, taxation. Bookmark the permalink.

9 Responses to Reason No. 6,035: Why We Should Split the State – AB60 Driver’s Licenses for Illegals