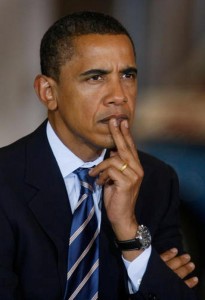 Sen. McCain recently characterized the bombing in Syria as “pin pricks,” saying the White House is basically doing little to nothing to stem the advance of ISIS. Because of Obama’s insistence on pin point bombing, the Peshmerga are not winning, the Iraqi’s aren’t winning, and ISIS is gaining ground.  It’s time for us to fundamentally re-evaluate what we’re doing and why?

The latest example of this [epic fail] by Obama can be seen in the Syrian city of Kobani. They’ve been in a battle for their lives for weeks. ISIS has them out numbered and outgunned and it’s block by block fighting. It’s a desperate situation and thousands of Kurdish lives hang in the balance.  Nothing Obama has done has helped turn back ISIS.

Kobani is located just inside Syria, next to the Turkish border which makes resupply necessary to cross through a portion of Turkey. Kurdish resistance needs resupply and reinforcement immediately, but they can’t cross into Turkey. The Turks won’t allow it. This blockade is for both good and bad reasons. If the Turks are seen as helping the Kurds they will anger a lot of Turkish (Muslim) radicals that support ISIS and hate the Kurds. They would be asking for a lot of internal trouble if they help. They also risk war with ISIS along their 500 mile border with Syria.  If that wasn’t enough Turkey has no use for President Assad in Syria and they see anything done to ISIS would hurt the rebels fighting against him.   Their predictable paralysis come from a complex situation  that can only benefit ISIS.  Turkey is in a tough position, no doubt about it.

Obama and NATO should have some influence with the Turks, but so far that hasn’t happened and this can be attributed in part to Obama’s previous wishy-washy decision making.  The leverage has been on the side of either ISIS or the Turks, but not NATO and certainly not the USA.  At the core of the problem, the Turks are simply too fearful of what their support for Kurds might generate.   They have a long standing prejudice against the Kurds over past border disputes. So here they sit, blocking relief effort and watching as ISIS kill off Kobani one block at a time.

Chalk it up to politics, religion, mixed loyalties, age old prejudices against Kurds and of course fear of ISIS.

ISIS is currently winning the battle for Kobani, but the Kurds are putting up a good fight, then again, they are facing annihilation. Their defeat could come at any time. If it happens President Obama has to accept some of responsibility. He had the opportunity to act, use the awesome military strength at his disposal and stop ISIS cold, but for reasons that even dovish Jimmy Carter can’t fathom, he’s failed to act. I’m wondering if the pressure of being the president isn’t too much for Obama? He’s bungled so many things that has cost us dearly, I’m surprised we’re not out protesting in the streets with torches and pitchforks demanding his immediate resignation. He’s sure got it coming.