Is ISIS Really a Muslim Operation? Part 1 of 2 (Knowing Your Enemy)

(Children in training to be ISIS fighters)

The members of ISIS like any volunteer army of zealots has it’s crazies, misfits and characters with questionable backgrounds and motives, but make no mistake, this is a Army of Terrorists and they are Muslims.   But, keep in mind that when I say Muslim there are many components of Islam, just like there are many components of Christianity.   However, it is fair to say that on the whole we are looking at mostly people of Arab descent who identify in general terms with the Sunni side of Islam and more specifically the Salafist ideology.    They (Salafist) are supported the world over by Saudi Arabia and Qatar which are avowed Sunnis.

CURRENT HEAD OF ISIS:  The founder and current head of ISIS is Abu Bakr al Baghdadi, see pic on right.   He was a brutal warlord and we had him prison in Iraq in 2009.  We knew he was an extreme threat to 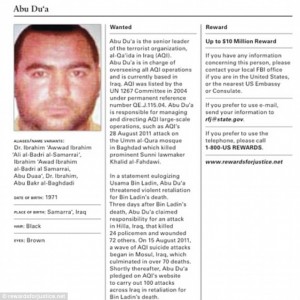 stability in Iraq, but for reasons that have never been fully explained or justified, President Barack Obama released him from custody in 2009.   Yes, Obama released him.  This was a decision that could only be made at the highest level of our government because almost everyone else, including the Iraqi’s, wanted him held in custody.  He was too dangerous to be released.   This man was the senior terrorist leader of Al Qaeda in Iraq!  Why would anyone think it would ok to release this deadly terrorist?   If you want to read more about this part click here.

The Salafist movement, also known as the Salafi movement, is a movement within Islam that references the Salafist doctrine known as Salafism.  Many Muslims in Qatar, UAE and Saudi Arabia identify as Salafists: 46.87% in Qatar, 44.8% in UAE, 5.7% in Bahrain and 2.17% in Kuwait.

The New York Times wrote, “Don’t fear the Muslims, fear the Salafists. ”  I linked their name to the article for you, it’s a good article.    These ISIS guys are true Islamic radicals, they are so wrapped up in their faith that they have given themselves over to their religious leaders and they will never question them or their motives.   That’s incredibly dangerous.

The good news is that many honorable, moral, Muslims from around the world have condemned the savage acts by ISIS.   Naturally, they claim that ISIS fighters are not real Muslims.  They say they have hijacked the faith and don’t belong to their religion.   However, as much as I applaud them for rejecting ISIS this statement that they are not real Muslims is more of a wish than a reality.  They (ISIS) are Muslims…very traditional, fundamentalist Muslims and they see themselves as purists and reformers of the faith that has moderated too much over time.   I had some in-laws I would have like to have disowned, but the fact remained they were my in-laws.   So, yeah, they may not like ISIS, but they are Muslims none the less.   Please read on.

WHO ARE THE ISIS/SALAFISTS AND WHY ARE THEY DANGEROUS:  One of the better explanations I have found to describe Salafists comes from the Muslim historical writer, Shaikh Nuh Ha Mim Keller     He writes, “The word salafi or “early Muslim” in traditional Islamic scholarship means someone who died within the first four hundred years after the Prophet (Allah bless him and give him peace), including scholars such as Abu Hanifa, Malik, Shafi’i, and Ahmad ibn Hanbal. Anyone who died after this is one of the khalaf or “latter-day Muslims”.

In terms of ideals, the movement advocated a return to a shari’a-minded orthodoxy that would purify Islam from unwarranted accretions, the criteria for judging which would be the Qur’an and hadith. Now, these ideals are noble, and I don’t think anyone would disagree with their importance. The only points of disagreement are how these objectives are to be defined, and how the program is to be carried out. It is difficult in a few words to properly deal with all the aspects of the movement and the issues involved, but I hope to publish a fuller treatment later this year, insha’Allah, in a collection of essays called “The Re-Formers of Islam“.

1. that their interpretations are acceptable in terms of Arabic language;

2. that they have exhaustive mastery of all the primary texts that relate to each question, and

3. that they have full familiarity of the methodology of usul al-fiqh or “fundamentals of jurisprudence” needed to comprehensively join between all the primary texts.

Everything the Salafists do as ISIS in Iraq, Libya and Syrian can be justified by their strict interpretation of shari’a law as defined by the original schools dedicated to jurisprudence.    This gives them cover to do all sorts of barbarity not seen in many centuries.   They are like robots and deflect their personal conscience to what is written in the Koran and in their shari’a law.

Hope this helps clear up any misunderstandings of who we are dealing with in Iraq and Syria now.   One parting thought, while you’re sending your sons and daughters off to fight these bad guys don’t forget to thank Obama for releasing their leader.

6 Responses to Is ISIS Really a Muslim Operation? Part 1 of 2 (Knowing Your Enemy)