The Children of War

There is a new wave of terrorists coming our way and they are unlike any soldiers you’ve ever seen before. These are children caught up in war and they are being programmed to kill by ISIS and Al Qaeda in Syrian, Iraq and to go wherever they may be needed. They may even be coming in the next group of refugees to America; how would we know? We wouldn’t. 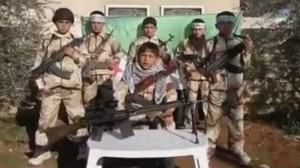 The longer Obama drags this fight out and refuses to do anything meaningful to stop ISIS, the more dangerous this new threat becomes.

These Muslim kids are sometimes taken from their families (conscripted) or they volunteer because they have no place else to go. They are typically around the age of 13 or 14 and they haven’t even developed their conscience yet. Equally as bad, they’re eager to please their adult handlers and they don’t appreciate the dangers of the battlefield. In their minds, they’re caught somewhere between a game-like world and the reality of modern war. This makes them extremely vulnerable to manipulation by their handlers and extremely lethal against our soldiers.

“The potent blend of military training with ideology is especially dangerous for impressionable minds, which is exactly why ISIS is targeting the young. There’s no term better suited to it than brainwashing,” Winter said. “These children won’t have any point of reference other than jihadism so the ideology will be a lot more firm in their heads and a lot more difficult to dislodge.” From an article by Cassandra Vinograd, Ghazi Balkiz and Ammar Cheikh Omar

“While the use of child soldiers in Syria is not an abuse unique to ISIS, it is most prominent with the group, according to Charlie Winter, and billed as a necessary education.” Charlie Winter Quilliam Foundation, UK

Some of these Jihadi kids are as young as seven, they could be war orphans or volunteers, but they are all being trained to hate and kill for ISIS. We’ve known about this threat for several years and we’ve also witnessed the brutal results in African nations that were among the first to employ child soldiers. The depravity exhibited in Africa equals that of ISIS in Syria and Iraq and it spreads like cancer.

Why Obama has NOT acted to head off this coming nightmare, I can’t even begin to understand? These kids are showing up in the battlefield right now and soon there will be thousands of them. Time is not on our side – nor theirs. Obama needs to act now, but the odds are he won’t. He’s more focused on the catastrophe of our oceans rising about an inch over the next 100 years.

13 Responses to The Children of War