Will the State of California Make the Sale of Colt .45’s Impossible?

According to industry sources, firearms dealers in California are being told by Colt that many of their pistols are going to fall off the roster of “approved” handguns for sale in the state within the next 60 days due to a change in manufacturing.

In order to make doing business in California extremely difficult for firearms manufacturers, democrats have layered the import system with red tape and redundant, but costly testing of firearms to be sold within the state. 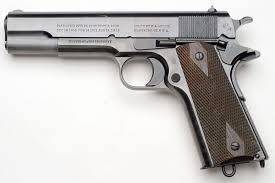 Not only must all imported firearms comply with arbitrary design changes made mandatory by this state, but all manufacturers must supply test firearms and pay for the testing on them, to insure safety.  This is repeated by CA even though the manufacturer has already done this in their quality control department and submitted the same firearms to the federal bureau of A.T.F. for safety certification.

There is simply no good reason why this process should be repeated a 3rd time, except that it is another tool used to obstruct the sale of firearms in California, albeit under the guise of “safety.”

This is a fraudulent and underhanded method to deprive citizens of their Constitutional rights on several levels, first is a restraint of trade and it also it violates the 2nd amendment,  a citizens right to bear arms.  But, this is nothing new for these reprehensible democrat legislators.  They have long violated a citizens property rights by a blanket imposition of an arbitrary “10 day waiting period” before a citizen can pick up the property (a firearm) they lawfully purchased and were back grounded to recieve, even though they may even be police officer or a licensed person, legally allowed to carry a concealed firearm.

If CA blocks the sale of Colt’s model 1911 .45 cal semi-auto, they will be blocking the most sold pistol in the entire United States.  The 1911 design is time tested long before WWI.  Further, it was extensively tested and approved by every branch of the military and its been carried into war no less than 6 times over the last 94 years!  It’s a favorite weapon of CA law enforcement and civilian shooters too.  How could the State of CA think they could get away with such a travesty?  No weapon in history has had more testing!  Do they really think the people are that stupid and timid that they could do this to them?  Apparently so.

According to Cal Guns – In 2014 A federal court found the 10 day waiting period did violate the US Constitution, however, AG Camilla Harris, a notorious San Francisco gun grabber, filed an appeal with the US Supreme Court and that case is still pending.

Here are the shameful details of Ca attempt to deprive citizens of their Constitutional rights:  “In the decision released this morning, Federal Eastern District of California Senior Judge Anthony W. Ishii, appointed to the bench by President Bill Clinton, found that “the 10-day waiting periods of Penal Code [sections 26815(a) and 27540(a)] violate the Second Amendment” as applied to members of certain classifications, like Silvester and Combs, and “burdens the Second Amendment rights of the Plaintiffs.”

“This is a great win for Second Amendment civil rights and common sense,” said Jeff Silvester, the named individual plaintiff. “I couldn’t be happier with how this case turned out.”

Under the court order, the California Department of Justice (DOJ) must change its systems to accommodate the unobstructed release of guns to gun buyers who pass a background check and possess a California license to carry a handgun, or who hold a “Certificate of Eligibility” issued by the DOJ and already possess at least one firearm known to the state.

Additionally, Judge Ishii said that the defendant, California Attorney General Kamala Harris, had to “show that the 10-day waiting period either falls outside the scope of Second Amendment protections as historically understood or fits within one of several categories of longstanding regulations that are preemptively lawful.” The State of California failed in that exercise.

Yes, California has indeed failed in that exercise and failed as an honest broker of the US Constitution too – need I bring up all of California’s sanctuary cities to underscore my point?

4 Responses to Will the State of California Make the Sale of Colt .45’s Impossible?