One of the last official actions of President Clinton before he left office in 2001 was the pardon of Mark Rich.  The FBI looked into the pardon, but could find nothing that would conclusively link Clinton to breaking the law, but what they did find was highly suspect and made Clinton look like a “Pay to play” kind of politician, which he and Hillary were and still are. 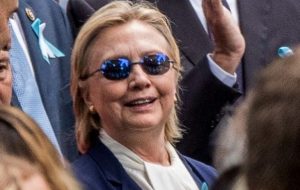 “Rich, who died in 2013, was a financier who fled to Switzerland after being indicted on multiple federal charges, including tax evasion, in 1983. Clinton’s motive for pardoning Rich was questioned because Rich’s ex-wife, Denise Rich, was a wealthy Democratic donor who made a $450,000 donation to Clinton’s presidential library foundation and more than $100,000 to Hillary Clinton’s Senate campaign.

In a statement, the FBI said that any material requested three or more times under the Freedom of Information Act is automatically made available to the public online on a “first in, first out basis.”  Washington Post

While we’re talking about the Clinton’s, do you remember the controversy about the artifacts they looted from the White House when they left?  Of course, they blamed it on the moving company for cleaning out the Lincoln bedroom, the Oval Office, etc.  Sure, it

was the moving company, nothing to see here.  Just like there is nothing to see about the “pay to play” links between the Dept. of State and the Clinton Foundation.  Any money given and favor’s rendered to “friends of Bill” were purely coincidental!  And just because we now have the emails (thanks to Wiki-leaks and Scumbag Weiner) flying back and forth from the Dept. of State and the Clinton Foundation, coordinating being on the same page with their press releases re Hillary’s email server…there’s nothing to see there either!  You Clinton supporters just keep burying your head in the sand or wherever it that you park your head to avoid this unpleasantness.

2 Responses to Mark Rich Pardon Revisited (and other interesting things….)