BAMN (By Any Means Necessary) A Home Grown Terrorist Group 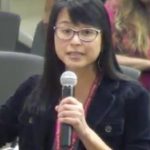 I’ve written about some pretty scary people during my 13 years  at Post Scripts, but this person (shown at left)  is whole new kind of cat.

Don’t let her petite looks fool you, this is a woman obsessed and delusional.  She’s the key person behind a pro-violence group that is spreading hate like an insidious epidemic and all under the banner of being defenders of minorities.

Her name is Yvette Felarca and when you hear what she is really all about, it’s even more frightening to discover that she’s a middle school teacher!  She is free to infect the minds of our children with her twisted paranoid delusions.

Felarca heads a national movement called BAMN, By Any Means Necessary.  This is a far  left group that is determined to silence the free speech rights of anyone they deem to be fascistic.  This includes people they feel are homophobic, xenophobic or even misogynistic.   I can’t recall all the categories she has listed as targets, but in her mind they are all her enemies that must be silenced.  Of course her BAMN definitions are rather broad.  Chances are, you would probably qualify as an enemy that must be silenced because you are reading this!

President Trump, for instance, would be a fascist akin to Hitler in their eyes (they have said so).  No doubt talk show hosts Sean Hannity or Rush Limbaugh would qualify as fascist in their view because they support Trump and they are sometimes seen as being politically incorrect.  Can’t have that!  And there are so many others BAMN feels that need to be silenced… by any means.  As I write, I have reliable information the FBI is investigating this group for terrorist activities, so this lady and her followers are not a joke to be dismissed as crackpots.

(Felarca is shown above with her finger in the air, a gesture a lot of Muslim terrorists seem to be fond of doing… my, my how coincidental. lol)

Her group is well organized and proliferating quickly.  They were the originators of the violence behind the neo-nazi protest in Sacramento last year.  More recently they were in Berkeley to shut  down the performance of a politically incorrect writer and comedian,  Milo Yiannopoulos.   Milo Y.,  is a British/Greek citizen, and writes for conservative Breitbart magazine.  His comedic-shock style at his lectures at various college campuses has made him controversial figure, detested by some on the far left.

Her group is dedicated to silencing just about anyone that she alone determines to be an enemy.  She makes no apology that her group has attacked and injured many people for merely being a Trump support or in Milo Y.’s case, politically incorrect in their free speech.  Her group seems to be well funded, well organized and employs military style tactics.  Brietbard claims the George Soros has given them $50,000, but I have yet to cooberate that.

What we do know is these radicals have have destroyed thousands of dollars worth of public property and hurt a lot of people who got in their way.  Shortly after the Berkeley riot liberals were accusing conservative radicals of posing as leftist protesters to give them a bad name, but that was before BAMN has stepped forward to declare their acts of violence a victory in Berkeley.

While on the Tucker Carlson show, on Fox News last night,  Felarca was asked to define exactly what she feels is a fascist?  She replied, and I paraphrasing,  “anyone who organizes a mass movement who attacks women, immigrants, black people and other minorities in a movement of genocide.”  Yes, she said [genocide] and I for one have not seen a lot of genocide in America, but apparently Felarca has and that makes me think she could be mentally ill, and quite possibly a paranoid schizophrenic.

Felarca accused Milo Y of being a fascist pushing genocide and for “creating a lynch mob mentality, organizing people who attack other people.”

Ironically the most flagrant examples of violence are only coming from her group.  BAMN has been responsible time and again for having a lynch-mob mentality as they attacked and beat down onlookers, protesters or anyone in their way, just to spread the violence.

When asked to give an example of this vast right-wing conspiracy of violence that she is claiming leads directly to genocide, she decried this man, this Trump supporter, (presumably a right-wing fascist) with a gun, shot and wounded a totally innocent protester at Washington State University in January.   She thinks this equals genocide?  Anyway, Carlson let this comment slide as he tried to pin her down on how she proposed to stop people she deemed a fascist or whatever.  (She was evasive – see video below)

Too bad that Carlson didn’t mentioned that the Washington shooter was an older man attempting to attend Milo’s event.   He was not genocidal or even a supporter of Milo Y as she claimed. He was just a man who went to the event and was surrounded by an angry group of anti-Trump crazies.  He fired his [legally] carried firearm at an attacker in self-defense.  One 34 year old male protestor went to the hospital that night in serious condition with a single gunshot wound to the abdomen.   After a careful review of the incident by the DA, the shooter was not charged.

Last year the Berkeley School District suspended Felarca for reasons never released to the public, but has since allowed her to return to teaching.

What is a a terrorist?  The dictionary says, Terrorism, use of violence and threats to intimidate or coerce, especially for political purposes.