Early this morning, at exactly 1:30 a.m., two shadowy figures wearing blue jeans and black hoodies covertly entered our cul-de-sac. They were moving briskly from one parked car to the next, stopping just long enough to open the glove boxes, consoles and do a brief search, even looking under the seats.

They scattered the contents of each car carelessly on their floors, perhaps taking only the most valuable items they spotted. My neighbors pick-up truck had a locked tool box inside, but next to it was an expensive carpenters level, too large for the box. They took that. Now they moved down the street towards my vehicles…. 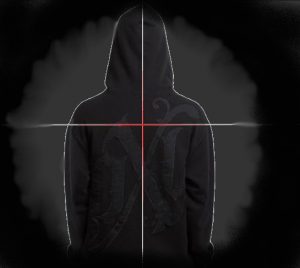 When they reached my daughters car they tripped a silent silent alarm which brought me out of a dead sleep.

I scrambled to put on my shorts and a tee shirt, grabbed my gun and headed for the front door, barefoot.  My daughter worked late and she was still semi-awake watching TV.

I said, “The alarm’s going off!” We had both been waiting for this to happen for a number of weeks since the last theft.   Our neighborhood seems to be very popular with thieves and I think it’s because we live so close to Bidwell Park where a number of homeless make their camps,

My daughter sprang to her feet and the first words out of her mouth was, “Good, lets get em!” She was ready to dash outside and make a citizens arrest. I told her to hang on and wait.  I peered outside through the almost closed window blinds. “He’s there, I see him… he’s in the – – – – .  Quick call 9-1-1.”  She grabbed a cordless phone and dialed as I watched the hooded figure enter my car, then handed me the phone.

A female voice answered on the 2nd ring, “9-1-1 what’s your emergency?” This is (insert my name) at ( —- address ).  We have an… “Hello 9-1-1 emergency?”  She repeated. “Uh, this is (my name) at ( street address ). We have an in-progress vehicle burglary, one dark figure in a hoody, can’t see much.”  The dispatcher asked me for the description as a matter of policy, but I couldn’t give her any, other than what I already said.

I could hear her typing as I talked and there was a pause.

I waited on the phone.  Nothing.  The seconds rolled by like minutes. My daughter peeked outside, “I see him!  Come on, lets go get him!  Lets go… come on, you’ve got a gun!”

She was chomping at the bit, ready to take this person down. “No, let’s wait for the police to get here.” My main concern was I didn’t want to scare him off.  I am too old to run him down if he rabbits and he surely would.  I wanted the police to cut him off!  We live just across from the park in a cul-d-sac and once he makes it into the wooded park there is no stopping him, he’s gone.

I still didn’t hear anything from the 9-1-1 dispatcher, but I thought she must be listening on the phone as she dispatched police to our location.  (That’s what I would have been doing when I was dispatching and I did work as a relief dispatcher for many years.)   The seconds ticked off way too slow.    This was taking too long on the phone.   So, I said something to the dispatcher like, “I think I’m going to try to engage the suspect, I’m a retired police officer and….”  But, there was no reply.  She wasn’t listening, but I could hear activity in the background.

I handed the phone back to my daughter and then I put on a pair of sneakers and grabbed a flashlight. Still nothing from the dispatcher.

Now I’m thinking of trying to catch and detain this guy.   I thought surely the police are on the way and should be arriving any second.  I remember from my old police days my response times averaged 90 seconds.   We kept records to prove our response time, so it was truly 90 seconds on average and that was within acceptable limits in our day and further, my patrol beat was about the same size as a Chico beat.  We were well passed that 90 second time when I finally decided, maybe I should try to catch the guy or at least try to spot him again.

Still I waited.  I thought, maybe they were tied up on another emergency call? Time was dragging, he was out there, only I couldn’t see him anymore.

My cars have been entered and ransacked about 4 times in the last year and I wanted to get this guy bad!  If I couldn’t see him, he probably couldn’t see me so I figured this was my opportunity to slip out the front door in the dark. Maybe I could place myself between the park and this guy, cut him off and make the arrest?

There were 5 vehicles parked on the street that had been entered.    A street light was about 50 feet away from the closest car, my daughters.  This gave me just enough light to see under the vehicles and now I am down low in the dark looking for feet, a shadow or something to reveal the position of the burglar.  Nothing visible.

I made my way slowly to the farthest vehicle up the street.  It’s drivers door was ajar and the doom light was on.  There was a backpack  lying on the streetside near the point of entry.   There was no sign of movement anywhere now,  the street was dead quiet.

Minutes had past since that 9-1-1 call, where were the police?  Believing that I probably lost him, I turned on my flashlight, scanning inside each vehicle and each yard as I made my way back towards the end of the street.  With each passing vehicle, hope was fading that I had trapped him.

By the time I reached the last car it was obvious he was gone. Now my daughter came outside and she walked away from me, towards the first vehicle that was hit, about 10 car lengths from where I stood surveying her ransacked Honda.  It was then that two people wearing hoodies showed up.  No doubt this was the team that was hitting the vehicles.  Had they returned for the backpack?

They were just 100 feet from my daughter, who now took cover behind a vehicle. She watched as they paused and then turned around and headed back out of the area.

I didn’t see anyone because they were just around the corner from my line of sight, but for some reason I glanced her way.  She was flailing her arms to get my attention.   So, I jogged towards her and finally she said in a low voice, they came back, they were just here, there’s two of them, one was on a BMX bike, wearing black hoodies.

Unfortunately, they left.  The street was now empty. We walked up the block and stood on the corner looking at Bidwell Park. Nothing. No movement, a few dogs were now barking, but there was no sign of them, they had escaped. All that was left behind was this backpack next to the pickup truck. (this would later be picked up by police).

We walked back to the first victims house and I rang the door bell. I had notified the majority of the neighbors when the first police car finally arrived. I tried to call 9-1-1 from our portable phone, but there was not enough signal so I walked right next door to my property and the phone came to life. I re-dialed 9-1-1 and and reached another dispatcher. I explained I had called in a crime in progress earlier and wondered if they had dispatched anyone? She could tell I was a bit angry and assured me her co-dispatcher had put the call out.

I think this whole episode must have taken about 8-9 minutes from the time I made the first 9-1-1 call, not too long, but long enough not to catch “hit and run” thieves.

The first officer on scene rolled up next to me in his squad car and I provided a brief description of the suspect I saw. The officer wheeled around to do a search and began using his spotlight on the park and down Vallombrosa Ave. (this street parallels the park). Maybe another minute passed and a second unit arrived. Then the first guy returned and we began to take stock of what might have been missing.

Several neighbors were now standing outside. Then a call came in on the police radio of a stabbing on Wayne Lane! I could hear other units rolling code 3 in the neighborhood. Wayne Lane was only about 8-10 blocks from our place. The officers did what they could to assess the situation, noting the license numbers of victim vehicles. They did a brief search and now they had another call. So off they went, but not before one of them suggested I put up a night-time camera.  I suppose, maybe next time they would have more to go on?

Bottom line: This should serve as notice to y-o-u that, once again, when the seconds count the police are only minutes away.