The growth of socialism has come to the end of the road in France. The socialists have taxed the middle class right into poverty and the people have had enough. The average working person must ask themselves, what meal do I skip today?  They ponder how many days they can hold out until the next payday?   A cement truck operator, Paul Aufrere said, “What’s happening right now is a citizen uprising.”

People have reached the breaking point because of high taxes and the gross inefficiency of a bloated bureaucracy. When the government tried to raise money through another gas tax, that caused many frustrated workers to take to the streets in protest. Gasoline costs about $8.00 a gallon and the French refused to pay once penny more!

In small rural towns you will see abandoned cars collecting in railway stations because their former owners can no longer afford to maintain them.

The government run utilities charge astronomical prices and that’s forced families to heat with wood and for cooking. Dining out is a luxury few can afford. Just going to the theater or going on a family road trip is out of the question for most. So, when a new gas tax was proposed people reacted in protest. It began in the poorest districts first and spread quickly. The movement is almost completely outside the bounds of politics. Mainly because they don’t trust politicians, no matter what brand they may be. 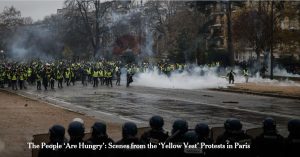 oo many safety nets have bankrupted the nation. For years politicians were elected on promises of providing free things, ostensibly paid for on the backs of the rich. It worked for a time, but now the rich are too few and the money has run out. The so-called “free entitlements” turned out to be the ruin of a nation. Now enter the people…. in yellow vests, standing in protest at the roundabout or marching around the Arche de Triumph.1    They don’t like to go hungry anymore than the mobs of 1789 that marked the beginning of the French Revolution.

The government has declared they will not give in to the protesters, although the gasoline tax has already been rescinded.

This entry was posted in Uncategorized and tagged protests, Rance, socialism. Bookmark the permalink.

14 Responses to Socialism Causes Workers to Riot in France