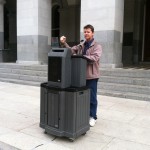 I made the baby-boomer cut by a year or two and don’t know what to think about social media.  Five years ago, when my kids began junior high school, I reluctantly set up a Facebook account to keep track of what they were doing.  I also wanted to know who they ran around with and what influenced them.  Before I started the Etc. Guy blog, I viewed social media as a waste of time.  At the time, a chimpanzee probably had a better understanding of social media than I did.  And I’m being generous.  Make that a sloth.

Now with blogging, social media is critical to develop my writing career.  Good articles are either circulated or shared.  Great stories go viral.  I now view social media, like Twitter or Linked In, as business tools.  They are platforms, or soapboxes, in an otherwise busy and noisy world.

I’m just a gnat in the internet universe but last spring I was contacted by a Michigan blog editor, through Twitter, who writes about family stuff in his blog, Dads of Divas.  The editor, Christopher Lewis, is also the father of two daughters.  He started Dads of Divas as “One Dad’s Quest to Regain His Kingdom One Day at a Time!”  Lewis examines both the personal and thought provoking aspects of fatherhood and married life.  Lewis serves on the management team of Western Michigan University’s Cooley Law School, near Lansing.  I’ve never been to Michigan but Lansing is in the “mitten” part of Michigan, inside the palm of the hand. 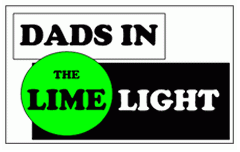 Anyway, I was sent a questionnaire, we exchanged emails, and I was subsequently interviewed for his series entitled, “Dads in the Limelight.”  The interview, though submitted in the queue last spring, was published last week.  If you read the interview note that Kate has seen moved away to college and that we’ve lost several more pets.  Oh yeah, and I had a birthday.  But pretty much everything else is accurate.  I’m not one to espouse virtues or proselytize moral values.  I have enough serious problems of my own.  Like folding towels or loading the dishwasher.  It’s strange getting interviewed…but cool for my work to be noticed.   I’ll still plug away at developing this writing gig.  Writing has become a passion.  It’s more fun than a zillion other things that compete for my brain’s space.  And I guess I’ll continue to figure out this social media stuff…because that’s the way it is.  Hope you enjoy the read.

7 Responses to Etc. Guy Interviewed by Michigan blogger…Dads of Divas