How Healthcare Has Fallen Under Obama

There is no question that some patients have seen an improvement in healthcare affordability, but the vast majority of us have seen our monthly costs spike to record levels. One of the frequent complaints is, in order to have an affordable monthly premium, the deductible is inordinately high. The results in the entire cost of personal healthcare fall right back on the user! Thus they are insured, but they rarely derive any benefit. The NYTimes reported, “…for many consumers, the sticker shock is coming not on the front end, when they purchase the plans, but on the back end when they get sick: sky-high deductibles that are leaving some newly insured feeling nearly as vulnerable as they were before they had coverage.”

Thanks to Obamacare, it’s not unusual to see deductibles in the 10-15k range. A number of large companies across America have forced their employees into this high deductible plan because it’s all they can afford! To make matters worse, persons paying out of pocket because of this high deductible are often deprived of the discount price insurers have arranged with the pharmacy, thus adding insult to injury. 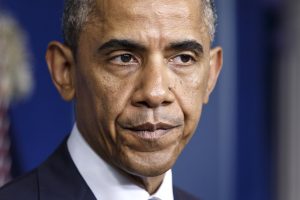 FILE – This July 18, 2014, file photo shows President Barack Obama speaking about the situation in Ukraine in the Brady Press Briefing Room of the White House in Washington. Obama stated the obvious: “We live in a complex world and at a challenging time.” The confluence of swiftly moving overseas matters comes at a time when the American public’s views on Obama’s foreign policy have been souring, turning what was once seen as his strength into a potential liability. (AP Photo/J. Scott Applewhite)

We are spending 3 trillion dollars a year on healthcare and it threatens to bankrupt us by driving the nation further into debt. Three trillion dollars a year is more than the GDP of France! The Obama Administration has made a mess of healthcare with more bureaucracy, more regulations, higher premiums and fewer options. If more people are eligible for healthcare assistance, but they can’t afford the premium and get stuck with a tax penalty, how is that helping?

Gary Delgado, a healthcare researcher at UC Berkeley said, While the racial barriers are significant, the biggest barrier for enrollment for people of color was premium cost,” Once again the democrats wind up hurting the very people they said they would help.

A key component to the high cost of today’s healthcare has been the enormous rise in the cost of medications! Some drug companies have found it very profitable to monopolized the ownership of many formerly low cost drugs. For example doxycycline is a popular antibiotic and has been relatively low priced for years, but in the last 5 years it has gone up 6000%. Why? Because the entire supply doxycycline is being controlled by one company. Competition is restricted by our own FDA that has imposed rules against cheaper imports. The very same drug can be purchased in Canada for a fraction of the cost it sells for here, but technically its illegal for you to buy drugs from Canada for importation here.

In a recent editorial, the New Yorker writes, “There is ample evidence that drug prices have been pushed to astronomical heights for no reason other than the desire of drug makers to maximize profits. Prices in many cases far exceed what’s needed to cover the costs of research and clinical trials, and some companies have found ways to rake in profits even without shouldering the cost of drug development.

The two worst offenders are bottom feeders that simply buy companies they believe have underpriced their drugs and then quickly raise prices to astronomical levels.

In August, Turing Pharmaceuticals acquired the American marketing rights to a 62-year-old drug to treat a devastating parasitic infection and raised the cost of one pill to $750 from $13.50. That brought the cost of a course of treatment for some patients to hundreds of thousands of dollars. (Turing’s founder, Martin Shkreli, was indicted on Thursday on charges of securities fraud involving a hedge fund and another biotechnology firm he started.)

Valeant Pharmaceuticals greatly increased the prices of several drugs it acquired, including two used by hospitals to treat heart conditions. It also protected its high-priced dermatology drugs by urging doctors to send prescriptions to a mail-order pharmacy that would make sure no cheaper alternative was substituted.

Almost everything the Obama administration promised us about affordable healthcare has not come true. Our choices are fewer and arguably the quality of care has fallen too and doctors are asked to do more with less. It has long been said that any time you ask government to do it for you, it will cost you more and you will get less in return. Today’s healthcare proves that to be painfully true.

10 Responses to How Healthcare Has Fallen Under Obama