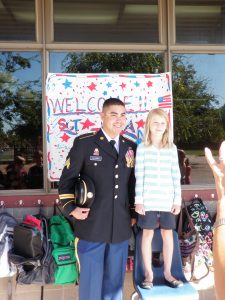 (Readers: I wrote this story based on an event nine years ago, glad to update it a bit.)

“Write to a soldier and cheer them up,” said Mrs. Larsen, while coordinating a holiday writing campaign for her fourth grade class.  My daughter, Maggie, carefully focused on the task.  Her vocabulary simple, the paragraphs consisted of short-syllable action words.  She wrote about her hobbies, family, school, and pets.  Her letter was boxed with sixty others and mailed, destination unknown.    ”You may not hear back,” I told her, “but we’re proud you tried.”

In 1971 my dad, an Air Force doctor, received orders to Vietnam.  My family wept. Writing him letters made me feel better.

In the post-New Year’s haste we completely forgot about the letter.  But in May an envelope arrived with a US Army return address.  The letter, addressed to Maggie, puzzled us.  Why did we receive a letter from the US Army?  We tore open the envelope unsure what to expect.  Written by a sergeant named Julian Alvarez, Alvarez responded to Maggie’s holiday letter but could not reveal his location.  Be he said everything was alright.  My family read Julian’s letter several times.  We wrote personal messages on a Memorial Day card and mailed it.

Summer passed and we wondered if our pen pal was safe.  The weeks blurred together and before long school started again.  Then one afternoon I received an amazing phone call.

“May I speak with Mr. Miller?” the man asked.  The gentleman’s voice was polite but serious.

“Who is this?” I challenged, not wanting to engage a telemarketer’s pitch. 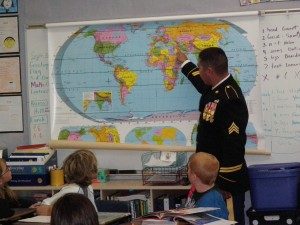 “This is Sgt. Julian Alvarez.  You sent me a Memorial Day card.  I’m back from overseas and my brother lives in Chico.  I have a gift for your daughter.”

Stunned, I hesitated.  “Sure.  Come for dinner.”  I hung up and wondered if I made a wise decision.  “He was sincere,” I explained to my wife.  “Let’s meet him.”

We anxiously tidied the house, hurriedly picking up loose ends lest we make a poor impression on our guest.  I started the barbeque, figuring a soldier merited a thick steak.

We were antsy—my family of four had a blind date. The dogs barked when Sgt. Alvarez arrived.  He wore his uniform, stood nearly six feet, and appeared to be in his mid-20s.  We made clumsy small talk at first but loosened up during the evening.  A cordial fellow, his conversation was purposeful.  Alvarez received 30 letters and was happy to get ours from Chico.  “I replied to everyone,” he said.  “Your family and another from the East Coast were the only families to write back.  Chico is near my hometown and I wanted to personally thank you.”

An eight-year veteran, Alvarez joined the army at age 17 and fought in Iraq and Afghanistan.  Our letter reached him in Afghanistan.  He led a team that provided convoy security for NATO forces.  Each soldier carried 120 pounds of gear for a mission that typically lasted 20 hours.  His longest mission, while under attack, was 70 hours.  He directly confronted the enemy numerous times.  Fortunately he was never wounded in battle.  “We lost several guys,” he sighed.  We listened quietly as he continued. “I got hurt a few times.  Explosions from roadside bombs rocked our vehicle.  We bounced around inside.”

He missed family and friends, but also trivial freedoms.  “I couldn’t leave base to buy a candy bar.  I took that simple liberty for granted.  And I felt bad for my mom who was alone.” 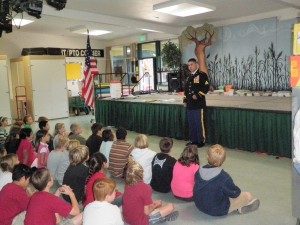 Alvarez was awarded the NATO medal for excellent conduct and the Afghan Campaign medal with two campaign stars.  He returned home to the Bay Area in September 2010. After dinner he presented a camouflage bandana.  “Army chaplains hand them to soldiers who ask.  Can I give it to Maggie?”  I read the language printed on the bandana and recognized verses from Psalm 23, “The Lord is my shepherd… though I walk through the valley of the shadow of death I will fear no evil…“  I smiled and nodded.

I’ve never served my country in the way Julian has.  I appreciate his sacrifice and taking time to contact us.  He even made time to visit Mrs. Larsen’s class.  I asked what I could do for him.

I’ve stayed in touch with Julian since that dinner nine years ago.  Still with the Army, we usually correspond during the college football season.

“Hey, LSU is taking it to your Crimson Tide,” I recently texted.  “That LSU quarterback is something else, too bad ‘Bama’s QB wasn’t full strength.”

Alvarez responded immediately.  “It was a great game, a few mistakes on our end but couple of awful calls from the refs,” he texted back.

He’s now a graduate of the University of Alabama with a master’s degree, married, and lives in Northern California.  And as of September he’s a dad.

He sent a photo of his daughter.  I smiled, “She’s a cutie, a brand new person, way to go.  Let me know when you get up this way.”

“Will do,” he texted back.  ”In the meanwhile I hope your CSU Rams get their act together.”

I congratulated him on wrapping up school and starting parenthood.  “You take care.”

Friendships can begin in unexpected ways.  Like this one, because of a fourth-grader’s letter to a soldier. Thank you, Julian.  Happy Veterans Day.

Visit me at the Etc. Guy Facebook page too.

This entry was posted in Holidays, Parent and Kids and tagged alabama crimson tide, csu rams, letters to solders, US Army, Veteran's Day. Bookmark the permalink.