“Dogs live in the moment and don’t care about anything except affection and food. They’re loyal and happy. Humans are just too damn complicated.” David Duchovny, actor and writer 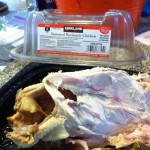 Just carrying a leash triggers bouncing and slobbering. The leash implies walks or car rides, maybe a romp in the park. But I had other plans. They bounded inside my SUV and I hitched the trailer while they panted through nose-printed windows.

My wife and kids were away vacationing, hotel style. I stayed home to batch it with the mutts. My week’s rations were deli sandwiches, salads, and a flock of Costco® rotisserie chickens stacked in the fridge. After chasing deadlines I needed a break—from work and Costco chicken.

I’ve shared life with many canines, some I liked more than people. Flicka, a German Shepherd, walked me to the bus stop during grade school. As a teenager, Shoni, a white shepherd-lab mix, was my trail riding partner whenever I saddled up. Susie, another German Shepherd, was my wife’s dog. My heart sank the lowest when Susie passed— her collar still hangs in the garage. 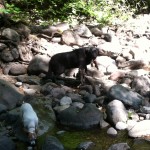 With the family away I schemed to trailer-camp with the hounds. If I had a flat tire or a puking mutt I’d turn around. No big deal.  Radio, a lab-mix, has a thick black coat and soft gray muzzle. Though she doesn’t swim or fetch and often gets carsick, her eyes look soulful into mine like an understanding grandparent. Four-year-old Lilla, a rat terrier, has tortilla-chip shaped ears, gnaws wood, and digs her own water bowls. She has more energy than a seventh grader on Red Bull®. When she makes eye contact it’s simply a probe for food.

I haven’t solo camped with dogs other than one college trip near Rocky Mountain National Park with Bobbi, a malamute. Then, I pitched my pup tent during monsoon rains after sharing a gut-busting dinner of hotdogs and Top Ramen®. At midnight I hurdled over picnic tables to an outhouse. Bobbi howled inside the tent. Neither mutt nor master slept. 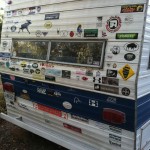 My destination with Radio and Lilla was a campground 40 miles east of town. I drove the first fifteen miles on a straight gradual climb. Curves dominated the next 25 miles which heightened the dogs’ anxiety. Their whimpers barely drowned out the trailer’s creaks and rattles. I peered through the side-mirrors on every curve and realized I became someone I loathed. I was the guy delaying traffic, trapping followers between yellow lane markers and guard rails. The line-up grew with every turn. Fortunately my trailer is covered with 90 bumper stickers—reading material for frustrated motorists. When I pulled into turn-outs several drivers showed me the bird while others honked appreciation.

We arrived at the campground, and as I picked a shady spot, the dogs panted over my shoulder. Drool covered my neck. The hounds squeaked like rusty hinges, excited for a new adventure. After parking my rig I leashed the mutts for a hike to the creek. They pulled like unequally yoked oxen with Radio tripping over Lilla. At the water’s edge they slammed their brakes. No bribe, not even a milk bone, could get them wet. My mutts are the only dogs in Northern California that hate swimming. 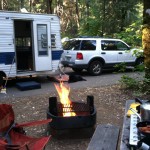 We returned to camp where Radio sniffed the fire ring and unearthed logs. Lilla growled at moths. I prepared a dinner of brats, green beans, beer, and milk bones—in no particular order—but the dogs didn’t complain. After supper I read by firelight while the dogs napped. When we retired to the trailer, Lilla yawned and crawled into her kennel and Radio lay on her pillow. Within minutes their snoring overtook the forest’s silence.

It occurred to me how simple their lives are. Their only needs are companionship, play, and food. For them life is not only good, it’s great. Unfortunately complications like work, deadlines, mortgages, and parenting cloud my thinking. But tonight I left the worries behind along with the cell phone reception. The night was perfect. 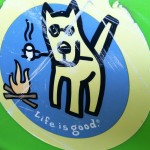 The average dog supposedly has the mental ability of a two-year-old child. I won’t suggest my dogs are as smart as toddlers but perhaps they’re more content than one. If only my life were so simple.

Share your dog story by commenting below.  Please also visit my Facebook page at Etc. Guy and LIKE it.  I’m still upgrading my main site.  Oh yeah, copies of my book Let Me Tell You a Story are available at my site and at Lyon Books in downtown Chico.